Teach Your Kids to Outwork “Smart” 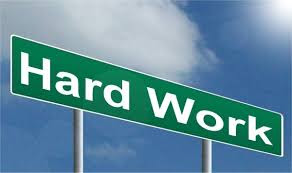 At the end of my junior year in high school, I had to fill out a form requesting classes for my senior year. I decided to take it easy and requested Senior English, French IV, German III, Spanish II, P.E. (required at the time) and Contemporary American Problems. The last one was the easier class which fulfilled the senior civics requirement. I could have signed up for International Relations, but it was harder.

Since languages were no problem for me, this schedule was a dream. What I didn’t know, however, was after three days in CAP I would be losing my mind. The teacher asked for volunteers to define democracy. They couldn’t. I knew if I stayed in the class I would lose it, so I made an appointment to see my counselor.

She took one look at the change I requested and anger clouded her face. “What were you thinking? Did you want to ‘slack off’ in your senior year?” She reached for the file listing available spaces in International Relations classes. There were several teachers teaching this subject. She placed me in Mr. Thomas’ class. I left the office chagrined.

When I opened the door to Mr. Thomas’ class, I recognized many of the other seniors already seated there. Six of them were the geniuses in my graduating class. I knew at that moment my counselor was teaching me a lesson. Mr. Thomas graded on a curve, and with these other students in the class, I would have to work very hard to maintain a decent grade. I was ticked off. I swore to myself I would show her!

I did show her, but she showed me too. I never worked so hard in my life, but did extremely well on each test. At the end of the school year, Mr. Thomas put our grades on the board. There were five A’s. But since there were six geniuses in the class, I was curious which one of them had screwed up. I knew he must have been embarrassed. Our report cards were passed out to us, and I looked down at mine. I was surprised to see I had earned an A. One of the “brains” in the class raised his hand and asked who had the fifth A, (only four of them had earned one). He pointed at me. The smart kids were shocked to learn I was one of them.

This was a valuable lesson. You can actually outwork “smart”. I was no longer angry at my counselor. Many years later I enrolled in an MBA program. I was the only student who had been a non-business undergrad major. I was also the only one to be paying for my degree. The others had all been business majors and worked in business. Their companies paid their tuition.

When it came time for our graduate level Statistics course, I knew they would all find it far easier than I would. I didn’t have Stat in high school or college. They did. So when the class started, and I was overwhelmed, I joined two study groups. Still, the class was horrible for me. It took on average, four hours for me to complete each problem we were given for homework. After finishing a problem and checking the answers in the back of the text, I found most of them were wrong, and I had to start over.

But this hard work paid off. After the class was complete and grades were distributed, I saw my results were better than several others in the class. They were frustrated. Many of them earned C’s, while I had received an A. They complained to the professor that I didn’t know anything about statistics when we started. He replied, “Well, she does now.” Yes, I did. I outworked them, just like in high school.

Teach your children not to fear the intelligence or skills of others in their classes. Competition can bring out the best in them. They can outwork smart. All it takes is focus, determination and a willingness to work hard.

To learn more about focus, which is covered in chapter nine of my book, Free College, (Click Here to Buy) from Amazon. It can help you avoid taking out dangerous college loans; it's for families of Pre-K through High School students.

Email ThisBlogThis!Share to TwitterShare to FacebookShare to Pinterest
Labels: #FreeCollege, #scholarships, excellence, goal setting, grants, hard work, how to be lucky, how to earn scholarships and grants, how to get ahead, how to win a scholarship, scholarship help